Not the most precise analysis in the world but at least he’s trying.  Problem with DCF is that TPL’s top and bottom line include both recurring (as recurring as royalties, water services, and easements can be) and non-recurring items (land and royalty sales).    #doubledipping

Steven Miller on SA: How Texas Pacific Land’s Proxy Fight Made Me A Dissident

Steven has been an active voice on the topic of TPL on the Seeking Alpha website in recent years.

Judging by the comment thread, can the vote even be close?  Sentiment appears to be with the White card.

There are nevertheless similarities between the current governance system of the Trust and a totalitarian system of government. The current trustees essentially have lifetime appointments. The Trust has had only four public meetings in the last 30 years. Information about wells drilled, the water business, and the recent land swap has been sparse or nonexistent, much to the frustration of shareholders. This has caused a continued sense that the trustees are hiding something.

For me, this misgiving started when a report came out that water was being piped from the Trusts land into New Mexico, a report that was never answered, as far as I have been able to determine. The trustees furthermore chose to nominate a general rather than the candidate that a significant block of investors have nominated. The trustees continue to demonize the opposing candidate, who has chosen not to strike back in kind.

Mr. Oliver is not a perfect candidate, and I still have questions both about his background and a statement or two he has made, but he has raised significant issues and has proposed solutions to them. He wants more transparency. He wants a change in governance. General Cook has announced support for term limits, but this came long after Mr. Oliver pressed the issue. The General has been fighting a defensive battle from the outset.

The trustees’ social media blitz irritates me, as does their insistence on taking credit for passive income. The Trust may call me a dissident for supporting Mr. Oliver, and they may be right to do so, but not for reasons they think.

Info is a little dated though there were some wise words on trading..

With a ROIC of 74.11%, it’s no wonder the trust has been piling on the investment in the water service business line. Comparing that ROIC to its WACC of 10.47%, the management is clearly adding value in the strategic move of setting up the water segment.

On the road with the kids so I haven’t had a chance to read this yet. Didn’t want to delay on sharing.

Steven Miller on SA: Texas Pacific Land Trust: Review Of The Quarter And Ruminations About The Future

Good read here.  The article includes a good synopsis of recent price and trust performance along with some practical thoughts about the future.

Steven is still long but isn’t optimistic about near term prices due to a forecast flattening earnings and overdone investor optimism.  Miller does seem positive about the long term trajectory of TPL.

The water business is new and growing; it already contributes 18.1% of the revenue. How long can the growth continue? The Permian Basin Oil & Gas Magazine reported last May that producers are able to satisfy most drilling requirements with local uses of water. “That and the influx of water treatment companies have made the market ‘brutally competitive.’” The Trust has managed to thrive in that competitive environment to date, but it may not have a large moat.

Projecting a stock price remains quite speculative. Given the increased focus investors have on cash flow and the projected fall in revenues, I do not expect the stock price to rise much from its current point. On the other hand, the pipelines are coming. Management is proactive. The Trust will continue buying back shares, per its charter. Management is doing something interesting with selling and buying land. The Trust remains a favorite among far-sighted investors. All these factors will keep the stock from sinking too far. Taking into account both the short-term bears and the long-term bulls, I project the stock to move sideways in a channel between $500 and $600 per sub-share (the Trust’s unique name for “shares”) for the next two quarters.

Revenues for the next quarter are projected to drop. A corresponding drop in stock price is entirely possible, but long-term investors will likely use any opportunity to buy shares. The Trust will continue to buy back shares as well. Therefore, barring any catalyst, I am looking for the stock to trade in a range of $500 to $600 for the next two quarters. Traders could well find some nice opportunities in that price range. Should management have another surprise announcement, the stock could well soar again far beyond that range.

Shareholders Unite via SA: Texas Pacific Land Crashed Along With Oil, What Now?

Some new analysis on Seeking Alpha is linked above.  Along with the analysis comes with a spicy comment section.  Lots of long term bulls mixed in with a few heroes that sold and plan to reload at the “bottom”.  Godspeed.

The article concludes that TPL will be ok (my words) as long as the price of oil stays reasonable.  “Reasonable” happens if OPEC/Saudi cuts production to take some supply out of the market.

While it’s fair to think about TPL as a strong derivative of oil, it is also worth thinking about the long game.  What is the terminal value of the land?  What drives that terminal value?  What about solar?  Migration/settling patterns?  Water?  New oil extraction technology?  Defense?  900k acres of arid land in the good old USA.

I’m not hanging my hat on OPEC playing ball.

Some quotes from the article:

You see that the volume effects are actually far outweighing the price effects, which is potentially worrying should the reverse happen:

-Because they compound, a lower oil price directly leads to lower royalty revenue per barrel, but also to less barrels produced.

-Insofar as the present explosion in the natural gas price is caused by production cuts in oil, it doesn’t provide much of a compensation as volume effects will counterbalance the price effects.

So OPEC is our friend here, they have learned an (expensive) lesson in 2015 and will try to limit output to support prices. As we already mentioned, there is considerable support from the price of natural gas:

And this at least provides some compensation from the loss from oil, but we should keep in mind that the gas price is rather volatile. Whether the present spike is going to last remains very much to be seen, although there are signs a tighter market is a more structural feature, as SA contributor Atlas Research has argued.

That is, if the world economy doesn’t slow down big time, and OPEC instigates production cuts and gas prices stay high, the damage to TLP could be fairly modest.

Unless we’re entering a really prolonged bear market in oil with no help from OPEC cutting whatsoever affecting not only prices but also production volumes of oil and gas in the Permian (and planned pipeline investments), we see no reason to get particularly worried about TPL. That scenario isn’t impossible, but we think it’s fairly remote.

More likely is that OPEC will cut production, and prices will stabilize or recover a bit. In this case, we’ll probably won’t see any production volume effect and we would argue that the price effect is already fully priced in, especially given the very firm natural gas price of late.

Still, the decline of the share price is understandable as production volume growth is likely to be more muted going forward, but this is a process that takes quite a lot of time to produce any meaningful impact, and what happens between now and then is anybody’s guess.

In short, we think at current prices offer a first entry point for a fairly unique kind of company.

The Oil Royalty Companies: Get An Exposure To Rising Oil Price At Half Of The Risk

This is where the royalty companies come in.

TPL differs from most if not all of the trust below by virtue of its surface land ownership.  Royalties are an important part of the TPL circus but they certainly aren’t the only act.

The authors give TPL it’s due later in the article.   Nice of them to make an exception.

Texas Pacific Land Trust (TPL) is one of the largest landowners in Texas with 890,000 acres in the much-prized West Texas, which were previously held by the Texas and Pacific Railway Company. By retaining perpetual non-participating oil and gas royalty interests, the trust generates revenue from royalties from oil and gas and from pipeline easements and leases. The trust also generates revenue from royalties on sales of water and direct sales of water. Generally, we avoid trusts, but Texas Pacific’s sheer size makes it an exception (Fig. 7). 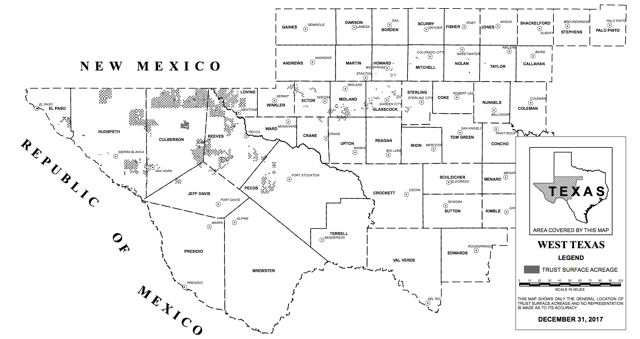